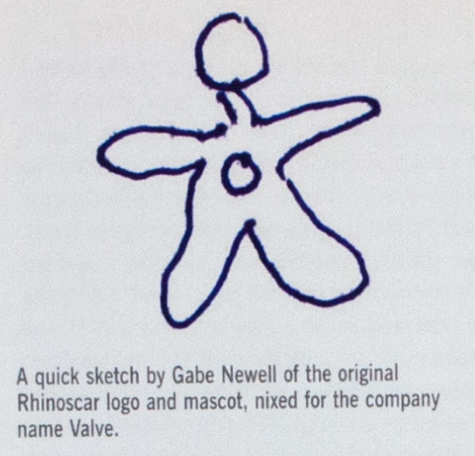 Exploring Valve Archive, part 25. valvearchive.com>archive>Other Files>Rhinoscar_Logo_Sketch.png Before Valve settled on "Valve", Gabe Newell and Mike Harrington played with different name ideas. These included "Fruitfly Ensemble" and "Rhino Scar", with the mascot of the latter seen above (the mascot is a figure with a large hole in their body, a "rhino scar"). It's also speculated that the potential names included "Holobox", although this is unconfirmed. Newell and Harrington finally settled on "Valve". In an interview, Greg Coomer details that they settled on this name as the function of a Valve reflected the type of relationship that the company wanted to have with it's future customers, in which they controlled the flow of the entertainment they produced: "It was about controlling the flow of an entertaining experience by having control over that control to decide when to increase or decrease it. It was a compelling metaphor."