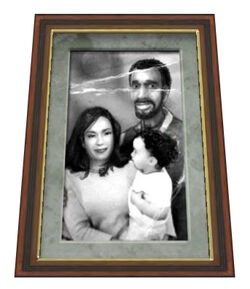 This is what the picture of Eli, Azian, and Alyx looks like in the model preview image. You can see Eli's appearance is completely different from how he looks in the picture in the final game. I for one am really confused and disappointed that Valve didn't end up going with this one. In retail, Eli in the picture looks the exact same as he does in-game, completely ignoring the fact the picture should've been taken 20+ years ago. I'm not sure we've got access to this early texture it's self, so I was hoping somebody could do a re-creation at some point. Also, if anyone has some extra time on their hands, I would appreciate a remake of young Eli as he appears in this picture for Black Mesa, along with Young Kleiner and his appearance on the Popular Scientist magazine from Half-Life 2.

Wait, I still have young Eli picture in my game