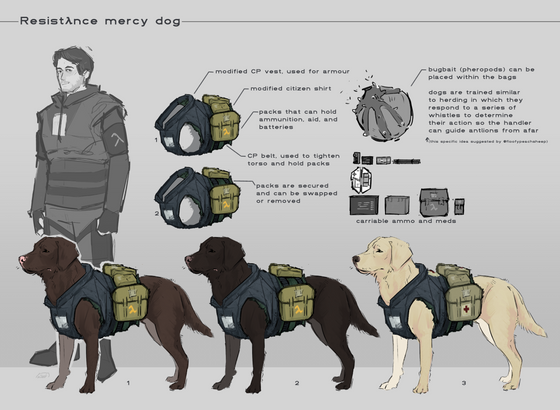 Resistλnce mercy dog Another animal that had faired well with the new conditions on earth were dogs, providing not only moral support to survivors but also much needed physical aid, they were easy to train with what the resistance had on hand. So Barney seized the opportunity, not solely teaching them for combat, but as mercy dogs, going to and from injured survivors or someone in need of aid. Supplies would be placed within their packs that anyone on the ground could access, and then with a simple command they could be sent back to a location or to the original handler to re-stock. Only in very rare occasions were these dogs used to attack, if in a 1 on 1 situation with surprise being the upper hand they were taught to maul on command but only if covering fire by other members of the resistance was available. In addition to this, a lot of the dogs were trained with techniques similar to herding. Therefore, bugbait (pheropods) could be placed within the packs to lead antlions and a handler could issue commands from afar by whistling to the dog. (thankyou to @floofypeachsheep on tumblr for this specific idea!) The most common dogs that were found were mostly labrador retrievers, but a lot of other breeds had survived the war and were picked up by citizens and the resistance. The first dog employed by the resistance was a black german shepherd named Mesa.

Wow, the idea is PERFECT!

"The first dog employed by the resistance was a black german shepherd named Mesa." This warms my heart.

YEAH another one, at this point barneys gunna have a petting zoo on his hands

but but..what if the combine kill a dog in front of us ?! all rebells will go full John Wick ! Nice art once again !

Hey, wait a sec. Alyx once said "Barney, you're not an animal person" Was she talking about headcrabs or cats only? Cause it looks like he's doing okay with dogs :)

Oh, you think barney trains all these guys? heeellll no, he just makes sure everything is going well, most of the dogs dont listen to a word he says and just think he's here to play anytime he walks into the room.