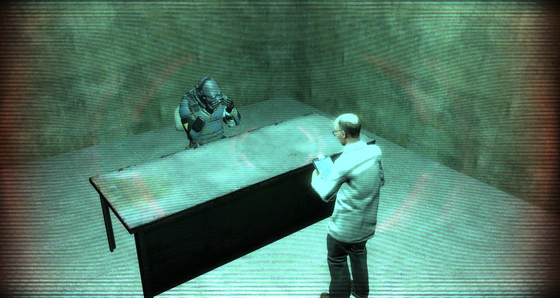 August 6, 200- During the event of a Combine raid, Resistance forces had many casualties yet the Combine remained defeated. In this event, witnesses say that an Overwatch soldier fled the battleground and after days of searching, it was found. This specific soldier did not resist to its capture, which at first, we did not note. However, due to the soldier submitting to its capture, we took it into the interrogation room. Only then did we find out that it remembers who he was. Doctor Isaac Kliener was in charge of asking questions due to his scientific status, it has been revealed from this soldier that the Combine are working on something but we still don't know the name. The soldier told Kliener about its purpose, to be some sort of headquaters for the Combine in the recently established "urban centres". He calls it the tower and the first one is currently being built in City-17. I, along with Kliener, my daughter and Russel, will venture out to City-17 to monitor the construction. The soldier has agreed to help us in our cause and will be moved to White Forest under Doctor Magnusson's watch. -Doctor Eli Vance, Black Mesa East