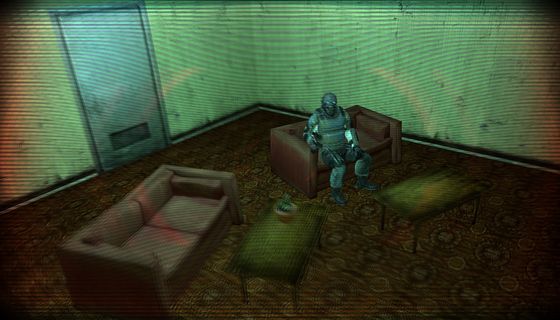 August 18, 200- I arrived in City-17, and what the soldier said was true. The Combine are building something, something of a massive scale. Unfortunately, however, as we were entering City-17, a "Bullsquid" attacked my leg and I had to have it removed. Once we had our temporary laboratory set up to monitor the progress, Doctor Magnusson sent me this image. The soldier has been placed in what looks to be a rehab zone. Magnusson adds that he did this so that the soldier can try to return to normal life, one downside is that the helmet and certain other things cannot be removed. He explains in the email that he'll try removing the battle armor some time tomorrow. Another detail is that the soldier cannot remember his name or life before the Combine. Magnusson gave him the name Tailor and he is currently getting used to said name. It appears that his code is "OWS-T143", while this doesn't show anything important, Magnusson says that he used T143 as a reference for Tailor. Updates will not be daily, but I'll try weekly. -Doctor Eli Vance, City-17

Some of the canonicity of these could be argued or at least better researched, But I'm along for the ride to see what you will come up with.

The lore is getting deeper.