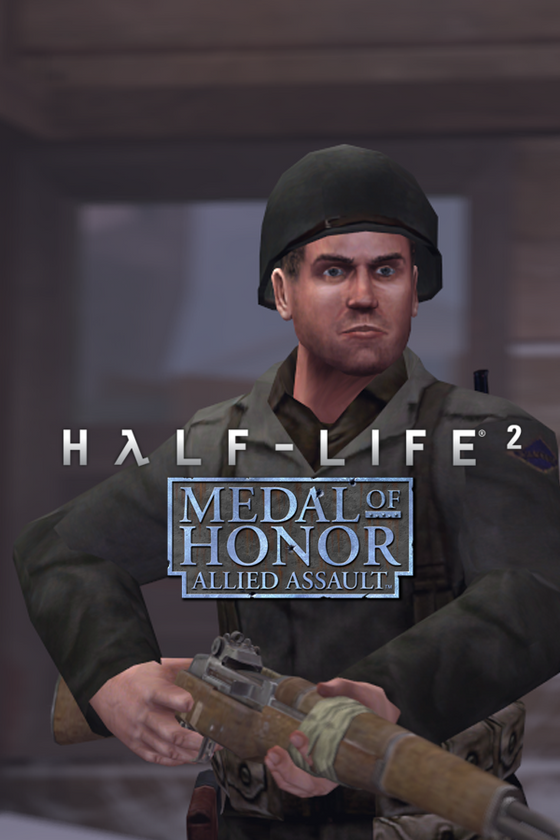 "You didn't play. You volunteer." -Medal of Honor: Allied Assault / Frontline tagline, 2002 Paying a tribute to the basically grandfather of all Call of Duty games, I decided to create this Half-Life 2 x MoH: Allied Assault artwork, where I imagined a basically the game Allied Assault, but now as a Half-Life 2 total convertion. This artwork was excerpted from my another artwork which originally featured in my "Rasputin - Half-Life 2 x The Legend of Zelda: Twilight Princess [SFM]" video. And yes, its actually game asset being ported to Source (but as Garry's Mod workshop asset, not a mod at all). And not gonna lie, I'm amazed that it uses standard HL2 characters' bone system rather than trash ragdoll bones, which makes it easy for me to making animations in the future if I want to. Last but not least, no. Day of Defeat: Source is NOT better than this game. Feel free to use this as non-Steam library cover art (if u happens to add MOHAA to Steam, anyway. The game doesnt have Steam release at all). #SourceFilmmaker #SFM #Valve #crossover #WW2 #HalfLife2 #SourceEngine #fanart #coverart