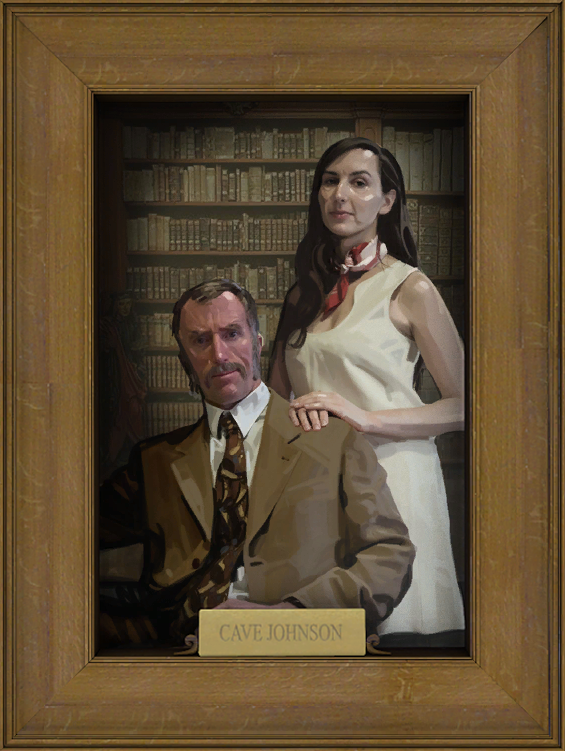 LORE THEORY (to fit the make the absurd Portal universe work within the realistic world of Half-Life): What if Cave Johnson has absolutely no idea what he's doing, and the real cause for any success he leads Aperture in is from the influence of Caroline? Think about it: Cave is essentially one of the billionaire philanthropists we see today: Elon Musk, Jeffrey Bezos, Mark Zuckerberg; all "self-made billionaire geniuses" who aren't really self made, and all take credit for other people's inventions. The only thing Cave has going for him is his money (which I wouldn't be surprised wasn't as "self-made" as he makes it appear), and his passion for science. This results in his leadership driving the company in weird and absurd directions, like injecting mantis DNA into people, developing repulsion gel as a dieting tool, and attempting to fit a consciousness into a computer because: "If we can store music on a compact disc, why can't we store a man's intelligence and personality on one?" With this aimless direction of a company in the logical and serious universe of Half-Life, it's no wonder why Aperture ran into financial trouble. Much like many direction-less billionaire's in the past, Cave chased ambitious ideas without much thought, and suffered the financial consequences. HOWEVER, my theory suggests that Aperture produced many of it's successes due to Caroline's influence over Cave. As heard in one of Cave's pre-recorded messages, Caroline seems to be the one running Aperture THROUGH Cave: "Sir, the testing?" Looking at this scenario: Aperture Science is a science company with an incompetent billionaire at the helm, forcing the company to go in absurd directions, but is also being secretly run to actual success by the billionaire's assistant. It doesn't feel so absurd in comparison to the realistic world of Half-Life anymore. Rather, it explains a lot of the absurd aspects of the games to be Cave's incompetence, or unprofessional sense of humour.

Another question: Why is Aperture Science even in HL's universe??